I had the good fortune to do a lot of traveling during the past three years. A favourite destination is Cairo. By some weird twist of fate I’ve been to Cairo five times. My last visit there had to be cut short due to the Corona virus outbreak. For a while now I’ve been thinking about capturing my experiences in these amazing cities in illustrations and story ideas.

Matthew Kalil’s The Three Wells of Screenwriting provides a great framework for grappling with writing (and creativity) even if you are not a screenwriter. In the book he describes three distinct sources or ‘wells’ that you can access when facing a blank page to create story ideas. The Three Wells are: The External Sources Well, The Imagination Well, and The Memory Well. For a start I’m exploring The Memory Well and The External Sources Well, combining memories of Cairo with Cyberpunk imagery. A great way to open up and explore a new world. I’m sharing some of the early results here.

Getting to grips with The Three Wells.

After doodling on a Saturday evening this guy appeared. I think it portrays my state of mind at the time – being away from home and battling with being by myself. Like battling a monster. He made me smile, and I felt better. His name is SKRIK. I think I’ll call him up again. Afrikaans: SKRIK en die Ondier. 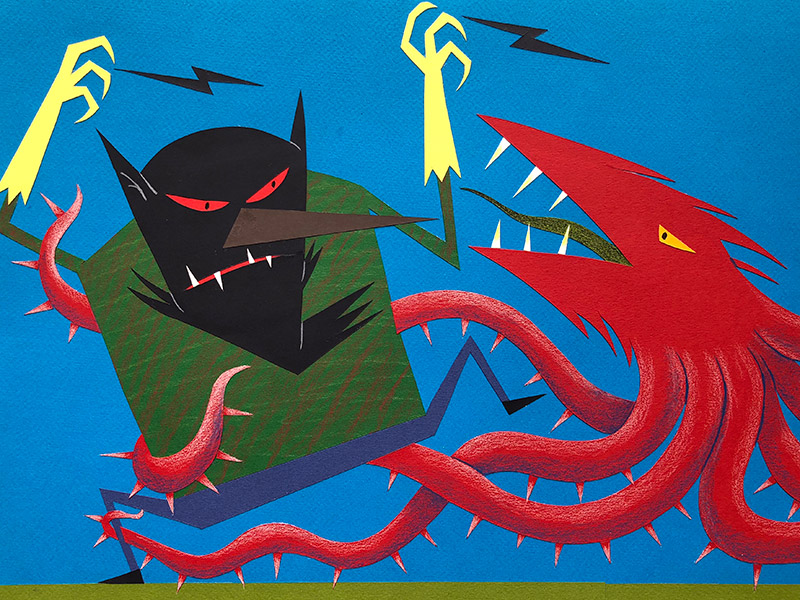 The bad guy phoning his master. 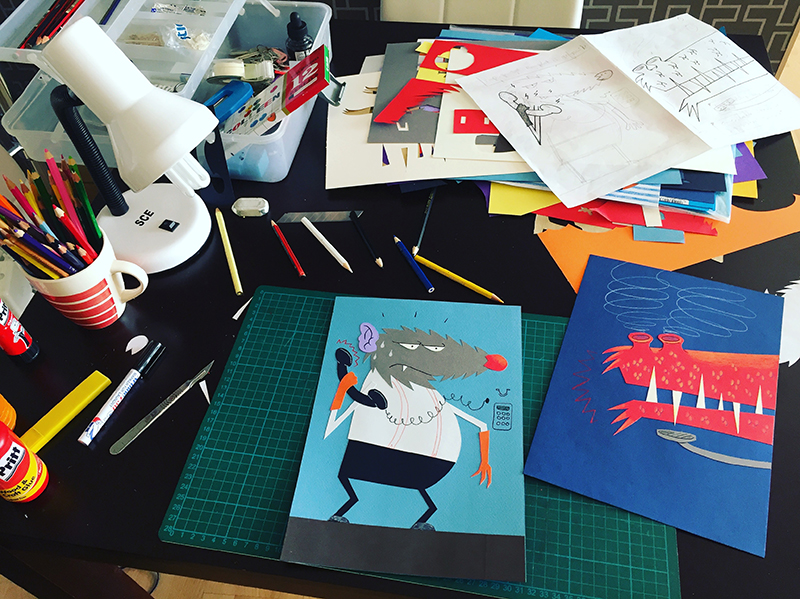 Random shapes become artworks. I love it when the byproducts of a process become works themselves. I’m tempted to transform them into paintings. 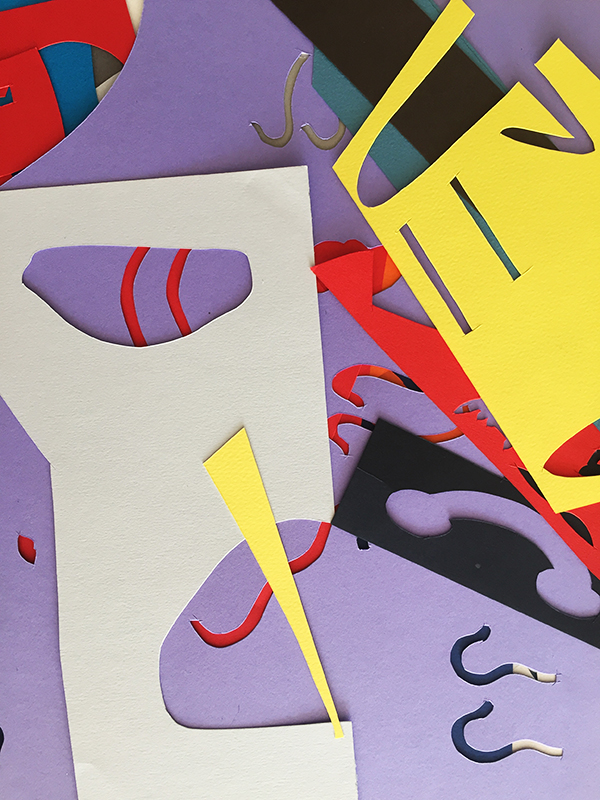 Sunday morning studio time. What to do next? 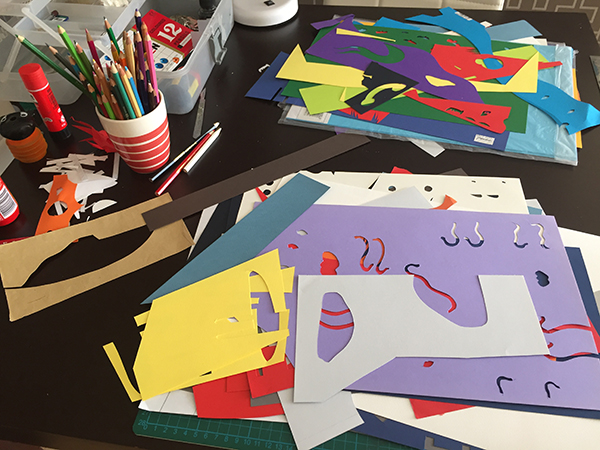 It has taken five years, but it is finally here. Moord in Ixia Straat the Afrikaans graphic novel by Sjaka S Septembir, Swart Streep, and Willem Samuel.

The book will be launched on the 9th of September 2017 at the Open Book Festival in Cape Town.

Scene from a new story taking shape about a gang of abalone smugglers who run into trouble.

It’s been three and a half years, but two days ago I made a drawing again. It bothered me that so much time had passed without producing any new work. As time went by I became increasingly hard on myself for not having the discipline and mental stamina to sit down and make a start. Doubts started surfacing: would I even know what to do when I picked up a pencil again?

So on Sunday I got to work. It was hard going at first. Sitting still can be difficult. But after two hours or so I became calm. I guess it’s what you’d call getting into the ‘flow’. Experiencing the flow is one of the reasons I make illustrations. It doesn’t bother me that some of them take a lot of time to make.

So when I was in this state of flow the past three and a half years replayed itself with a clarity that I don’t have in the day-to-day busyness. This is what I had been through: changed company four times, moved house five times, rebuilt one house, had a child, changed countries, and both my parents passed away.

In that moment of clarity I was thankful for the ability to sustain the love of drawing when life becomes too complicated to find time and stillness. And I’m grateful to myself for the time and dedication that I’ve put into the art of drawing, knowing that when the time comes the flow will always be there.

At Winter Wonders on 30 June I read from my books Mister King’s Incredible Journey and Mister Sengi’s Very Big Friend. It was a combination of a book reading and a drawing workshop. 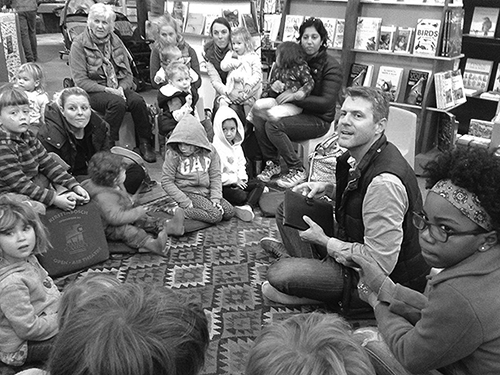 Running workshops with adults can be hard, especially if you give them paper and ask them to draw something. Running workshops with kids can be even harder if the group has a spread of age groups. Four year olds are very different to six year olds. Older children can seem sceptical and disinterested, but at the same time come up with sharp questions and observations. 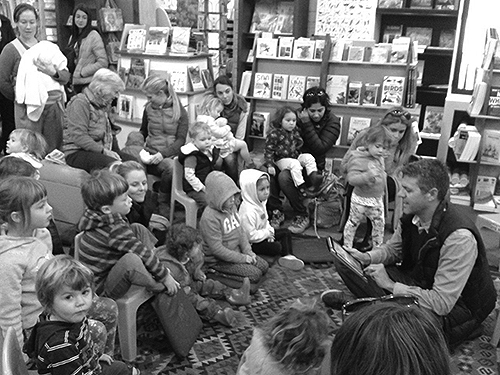 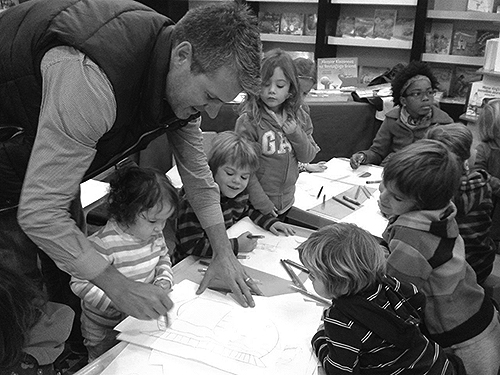 I ran a design thinking workshop with adults recently where they ignored the pencils and paper. Drawing is a form of thinking that is equally as powerful as writing and talking, for some people even more so. I’d encourage more people to pick up pencils and to start drawing! 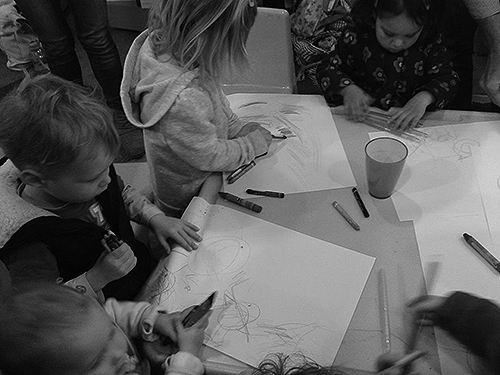 Yesterday was one of those days – no real focus. I ended up browsing TED talks and found Stefan Sagmeister talking about moments in his life that made him happy. He spoke about making lists – lists are good thinking tools. I am going to start making purposeful lists. Here is a screenshot of one of his slides. 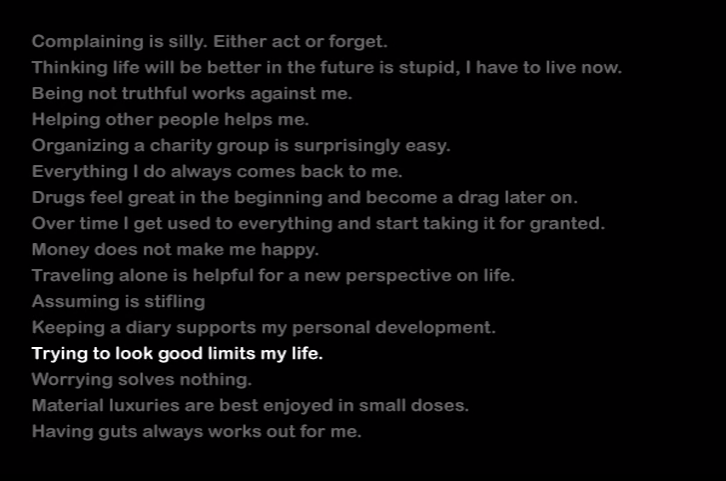 I’m reading The Sixth Extinction: An Unnatural History – a book everyone should read. Here’s why:

The way corals change the world – with huge construction projects spanning multiple generations – might be likened to the way that humans do, with this crucial difference. Instead of displacing other creatures, corals support them.

and this applies to humans too.